400 Rabbits: From Mexico to Asia...with Bamboo On the Way

Last New Year’s Eve, the owners of the Paper Fig Kitchen premiered their fusion-style Mexican restaurant and “tequilaria” with the opening of 400 Rabbits, which seems to have become a hit with locals and visitors alike.

Earlier this month, 400 Rabbits hosted a special event with a different menu to try out.  Instead of Mexican, they featured Asian cuisine designed by Chef Don Yamauchi.  Guest blogger Matt said that everything was fabulous and fresh, better than most Chinese take-out he’s had.  “My mother and I were sharing what we had so that we could try everything we could, and we were NOT disappointed.”

Well, they’re at it again.  There will be another “Asian Pop-Up” menu available on Tuesday night, July 13th, which will feature an all-new, all-different lineup of appetizers and entrees.  There will be two seatings at 5:30 and 7:00 by reservation only, so be sure to contact Debra by email at debra@400rabbitssanibel.com or by phone at (239) 558-8756.  On the corner of Rabbit Road (just a coincidence) and Sanibel-Captiva Road.

Of course, we also learned that this is a good lead-in to their new venture…Sanibel first-ever Chinese-style restaurant! “Bamboo” is expected to open in late August, located at 751 Tarpon Bay Road (formerly Il Tesoro Bistro).  Needless to say, we are very excited and hope to report on this new place soon.

直接預訂並保存! (Book Direct and Save!) 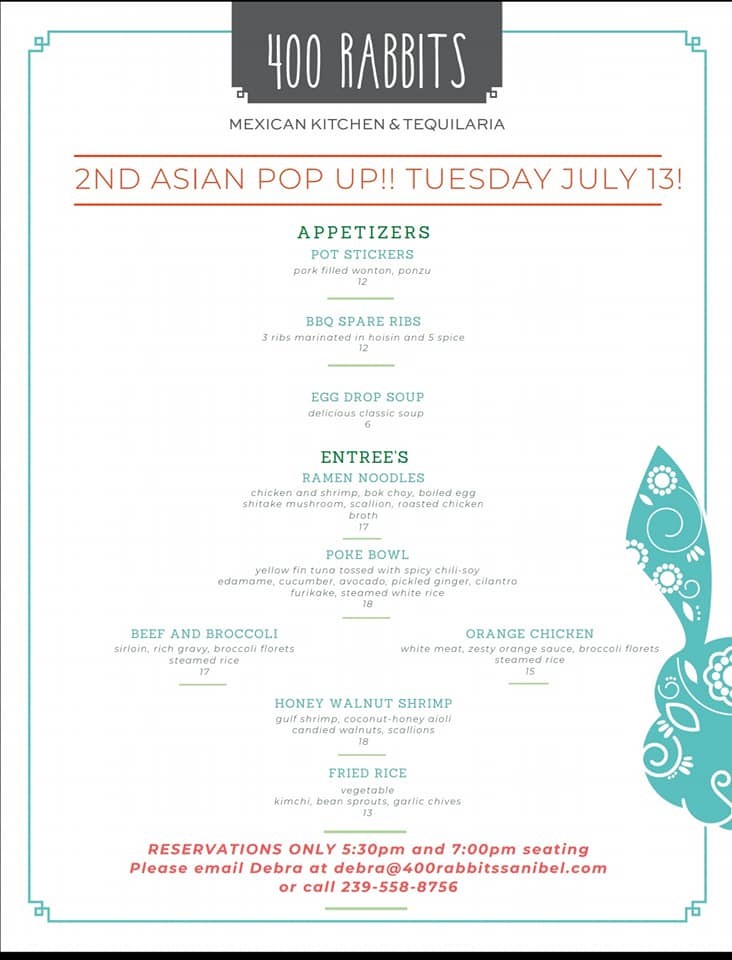