Coyotes on the Islands - One Near You?

We’ve talked about some of the wildlife on Sanibel and Captiva…birds, alligators, panthers, and the vicious no-see-ums.  One animal you might not expect to see in Florida, especially on the islands, is a coyote (typically a southeastern coyote).  First thing you’ll think is, “How would they even get out here? We’re three miles off the mainland.”  You’d be surprised to know they are apparently good swimmers, as seen last March when one was found swimming in Sarasota Bay…

Coyotes exist in all of Florida’s counties, even on barrier islands, though the first confirmed sighting on Sanibel apparently happened in 2011.  There have been several encounters between coyote and humans and/or pets in recent years, causing concern a couple of years ago when it appeared they were getting aggressive.  Coyotes have also been caught on wildlife cameras digging into sea turtle nests and snacking on the eggs, prompting the placement of screening when posting nests, small enough to keep predators out but large enough for hatchlings to get through.

They eat whatever food they can find, from fruit and seeds to garbage and pet food to small mammals (rodents and rabbits), so it’s best to keep pets close when walking them in times of low light and if you’re near dense woods where they may be watching.  If you encounter a coyote, try to make yourself look larger and wave your arms while making noise with what’s at hand (shake your car keys or toss objects), but do not try to injure it while you slowly back away.  NEVER turn your back on or try to run from a coyote (“I don’t need to be faster than a coyote…I just need to be faster than you!”).  Also, be sure to secure trash cans and any food that might be outdoors.

If you feel there is an aggressive coyote in the neighborhood you’re staying in, call the Sanibel Police’s non-emergency number at (239) 472-3111 or email coyote@mysanibel.com .  The City of Sanibel and the Florida Fish and Wildlife Commission have further information about living with coyotes.

And remember, just seeing a coyote (along with the rest of Sanibel’s beloved wildlife) isn’t cause for concern.  Follow this wise advice: 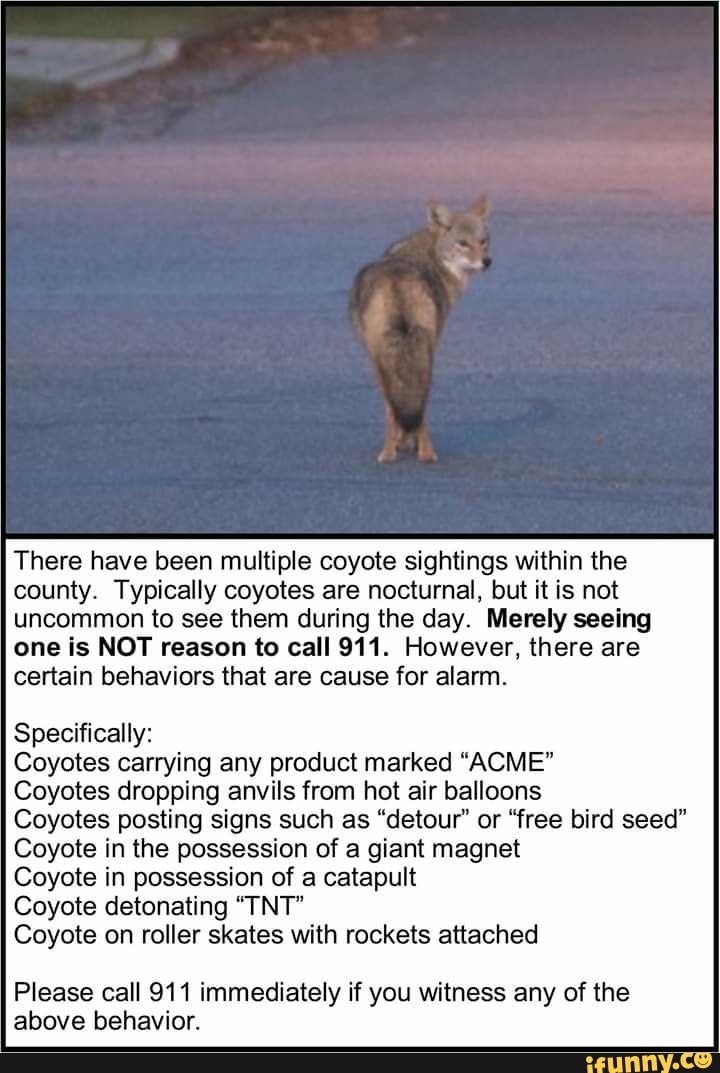