The Exotic Birds of Jerry's

We’ve talked about the wildlife on the islands and some of our tourists coming to watch our native and migrating birds.  But some live on the island year-round and entertain shoppers every day of the week.  For over 35 years, Jerry’s Plaza has been home to a half-dozen fine feathered friends to greet shoppers, some of which came only to see the parrots.

The birds have been cared for since day one by Dick Muench, who owns the Periwinkle Park Campground down the street.  In fact, the first birds moved in a week before Jerry’s Plaza opened in 1983.

As you walk up the center, the first parrot you’ll meet is GW (Gold Wing), a Blue and Gold Macaw native to South America.  GW is usually quiet, though he was known to have said hello quite a bit after an extended absence in 2019 when their large cages were repaired and repainted, so it’s clear he likes people.  He also likes to surprise them with a quick unexpected squawk to scare people.  Among his favorite toys is the bell in the left of this picture, often ringing it, especially during the holidays as he performs with the nearby Salvation Army volunteer collecting donations. 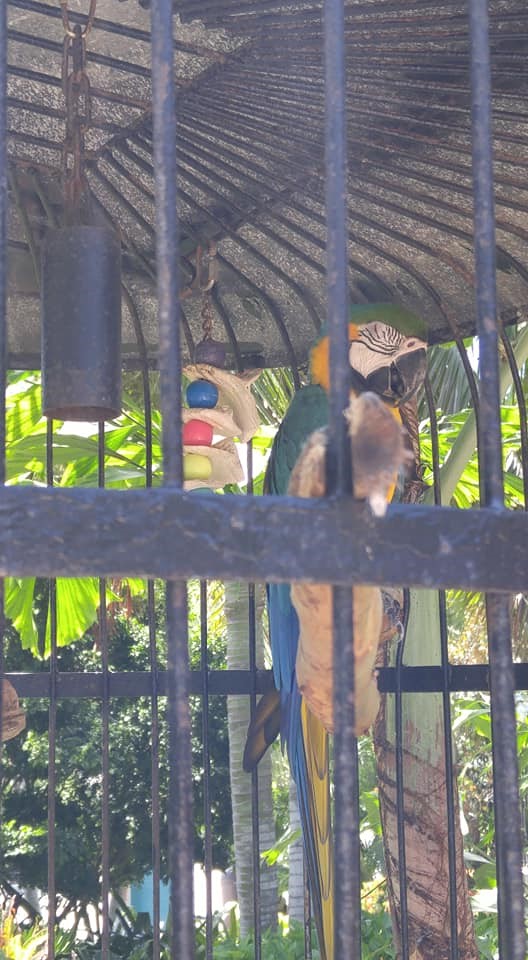 The “ambassador” to Jerry’s is Jerry Jr., a Yellow Nape Amazon parrot (also South American).  He’s a little shy, as he came into this location only a few months ago (Confidentially, there have been a few Jerry Jr.s over the years.  His predecessor would often call out “Hello” to new passers-by, but for those who would actively talk with him, he would enjoy their company and cheer, tease a profanity or two, mimic sirens, belch, and on rare occasions call “Here kitty kitty kitty! MEOW!” He also had several different laughs, which seemed to be his favorite thing to do.). 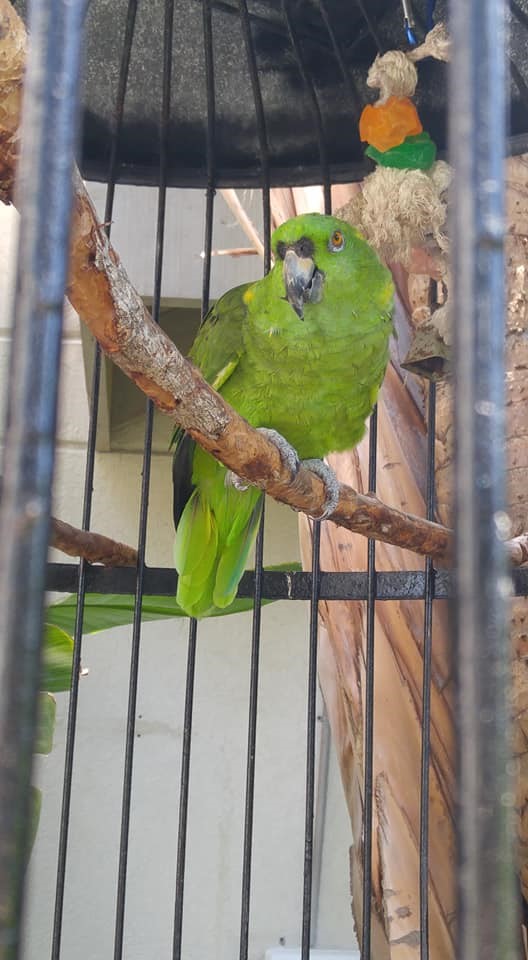 Rounding the corner from the supermarket, you’ll see the mischievous Caesar, an Umbrella Cockatoo native to Indonesia.  He has been known to say Hello or repeat, “Hi, Caesar” or mutter background chatter, but he definitely lets you know when he wants to be the center of attention when he raises the crown feathers on his head and screeches like he’s having a temper tantrum.  He is also know to play with people as they retrieve his toys that have fallen out of his cage.  As soon as he grabs hold of it with his beak, he drops it outside again, having fun making you keep picking it up for him.  He also like to play tug with the toy as you hold it and lightly pull against his beak strength, but manipulates the toy so your fingers gets close to his sharp beak and you instinctively let go.  He will also sometimes lurch forward to scare you for his amusement.  Caesar shows off his intelligence as he occasionally manages to clip rings to the bars of his cage and remove them over and over again. 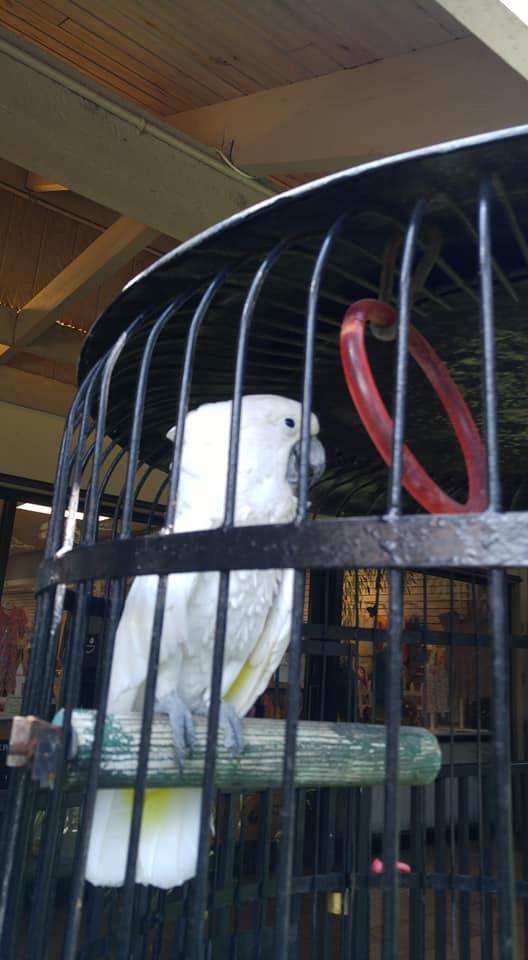 Babe is an African Grey parrot and one of the most vocal (when nobody’s around or looking).  She’s the only one that didn’t like her sign, as she managed to rip it almost completely off piece by piece with her beak, so no effort has been made to replace it.  Greys tend to listed to people talking to her and repeat them later.  If you sneak in early in the morning, she’s has a ton of sounds, including dropping “bombs,”  “What?”, “Yeah, right,” “SEE ya,” “BUH-bye,” “Pretty bird,” and others.  But she’s most famous for different whistles, including wolf whistles and cat-calls which gets some male customers in trouble with wives, girlfriends, and complete strangers.  She also entertains with her rendition of “The Andy Griffith Show / Mayberry RFD.” 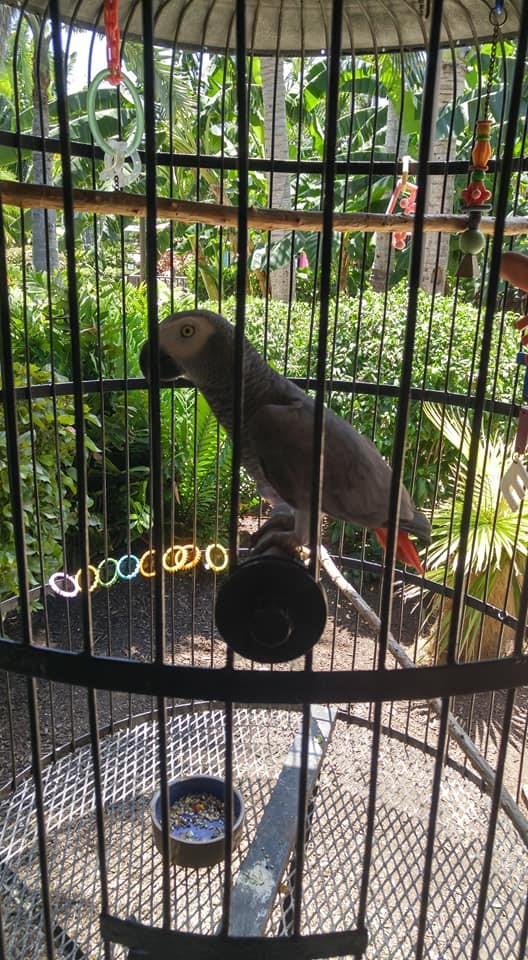 The mistress of saying “Hello” is Mia, a Military Macaw from South America.  She has an eager bob of her head and has a typical parrot “HEL-lo!” to you and rolls her tongue with other noises.  She will sometimes peer her head out, but don’t try to pet her, as her beak (as well as everyone else’s) is capable of biting your fingers off before you know it.  She also likes to hang right-side up with her talons from the ceiling of the cage and sometimes lets out a loud squawk for more attention. 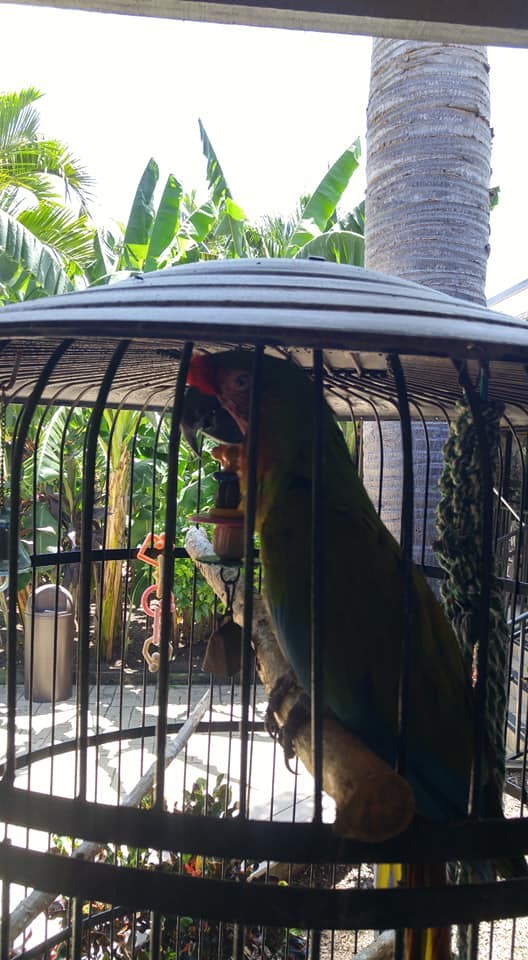 Our last bird is also South American, a Double Yellow-Headed Amazon named Dudley.  He’s usually quiet, but can occasionally squawk.  He’s one of the newer birds, having resided at Jerry’s for about five years.  Though shy, he does seem content watching people walk by. 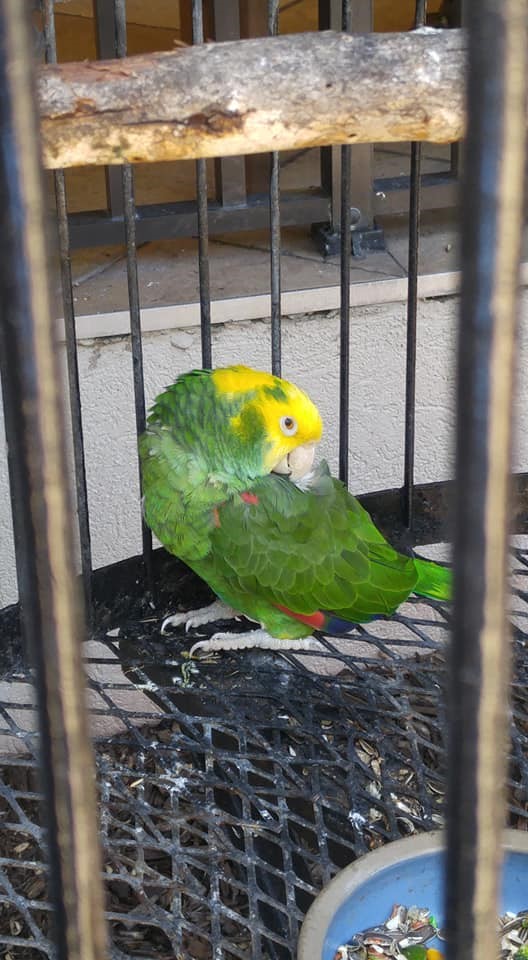 The parrots are typically in their cages year-round.  Though you might think this would be confining to them, they are actually comfortable in them and don’t like being taken out when necessary.  It’s like living in a large condominium with a regular diet (please don’t feed them; they’re watching their figures) in a safe environment.  On occasion, such as an especially cold January day or if evacuated for a hurricane (or, this year, to protect them from COVID-19) or cage repairs, they will be taken out and brought to their owner’s home at Periwinkle Park Campground in a special room.  When this happens, the Plaza becomes a much quieter and emptier place, no matter how many shoppers are here.  When they come back, you can tell they’re happy to see their fans again.

So be sure to say hello to the parrots at Jerry’s, especially if you’re checking in with us next door and picking up a few groceries afterwards.  Just watch out if they talk back at you!