Green iguanas (Iguana iguana…yes, that really is the scientific name), are seen in many parts of southern Florida, including on Sanibel and Captiva.  They are native to the southern half of Mexico and the northern half of South America (down to Brazil and Paraguay), but are very adaptive and have been found in Florida, the Virgin Islands, Hawaii, and Texas.

As babies and juveniles, they are usually bright green, which makes them fascinating when you see them (“so ugly they’re cute”?).  But they can grow as large as 9 pounds and (depending on the species) with some fading or darkening of colors.  They usually are timid enough to flee at the first sign of a threat or predator, some people have almost walked right up to one without realizing it and it doesn’t flinch.  However, if they feel threatened and unable to flee, they have extremely long tails that can be lashed like a bullwhip.  Like lizards, the tail can be broken off in an attempt to escape and regenerate.  They can also attack with claws capable of climbing trees and extremely sharp teeth (capable of shredding human skin). Iguanas are herbivores but are known to eat eggs or small amounts of meat (mice, etc.).

How Did They Get to Florida?

It’s believed that they were introduced as potential pets that either escaped or were abandoned and are able to adapt in the tropical system of Florida, except when temperatures in the winter dip into the 40s and 30s.  At that point, iguanas enter a kind of suspended animation or state of being stunned.  Sometimes this causes them to fall out of trees, which people mistake as a fatal condition.  In fact, they will “wake up” when brought into a warmer environment (indoors or in a car) to someone’s shock.  Meteorologists down here sometimes use the image of an iguana to describe the winter weather forecast: 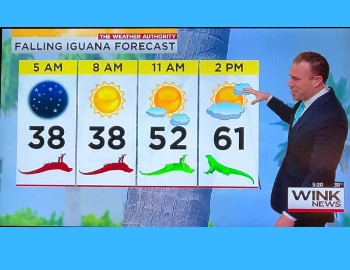 Are Iguanas Good or Bad for the Sanibel Island/Captiva Island Ecosystem?

Iguanas actually pose a terrible ecological threat to the native wildlife, eating plants meant for native species or eggs of endangered turtles, or burrowing underground and destroying habitats of Florida burrowing owls.  Not to mention the hack job it does to lawns and landscaping.

It seems to have come to a head when someone recently caught an iguana red-handed (green-handed?) stealing the food of Jerry’s Foods star mascot, Jerry Jr. (The thief was quickly scared away.) 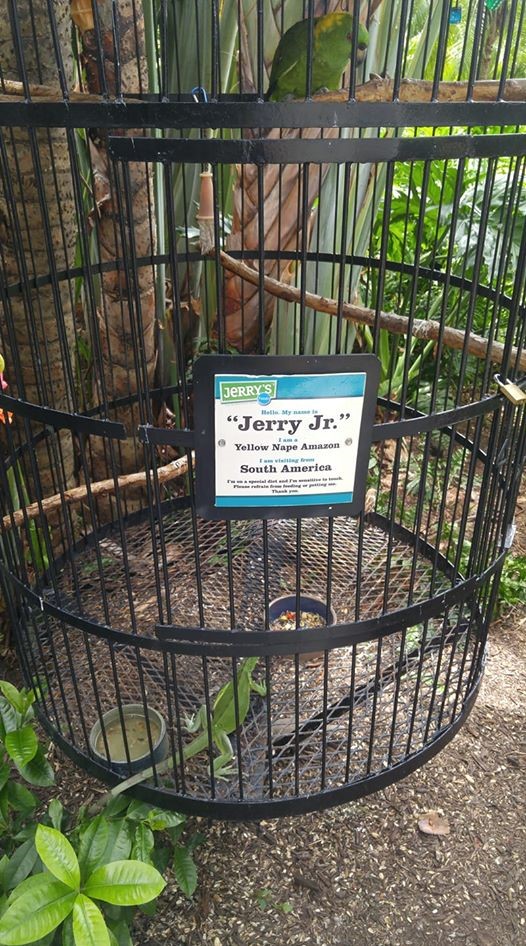 How is Florida Handling Iguanas?

Governor Ron DeSantis has advised and encouraged property owners to humanely kill iguanas on their land.  At present, due to budget cuts as a result of the pandemic, the City of Sanibel has suspended its Green Iguana Removal Program, but if you see a more dangerous lizard (such as a Nile monitor lizard or spiny-tailed iguana), please call the Sanibel Police at (239) 472-3111.

Sanibel Island and Captiva Island are filled with exciting wildlife from manatees, turtles, and even alligators! If you spot them out in nature, remember to respect their space, after all, they are wild! If you prefer to learn about wildlife in a safer environment, you can visit the J.N. “Ding” Darling National Wildlife Refuge's or CROW Visitor Education Center.

Browse our Sanibel Island vacation rentals and book your adventurous getaway to Sanibel Island and Captiva Island. Don't' forget to book direct and save!