Timmy's Nook and the American Legion

Not many people who don’t live here realize there are organizations like the American Legion established on Sanibel.  Those of us who live towards the West end of the island or Captiva pass by it every single day.  Sitting at the big “S” curve at mile marker 3 of Sanibel-Captiva Road, you’d often see a sign offering various food specials

For years, Legion Post 123 has served the community, open to the public with good food & drink and entertainment (weekly open mic night).  They’re also the only place on the island that has pool tables (with a weekly 9-Ball tournament).  They’ve also stepped up to help residents after disasters, providing meals after Hurricanes Charley in 2004 and Irma in 2017 (some having been donated by local restaurants who were without power and didn’t want their food to waste)

The Legion also features what might be called a monument to a piece of local history.  In the back yard, there is an open air dining hall which is made up to resemble the gone-but-not-forgotten Timmy’s Nook, a popular Captiva restaurant/marina/watering hole from 1952 to 1994.  The location was rebuilt into what is now The Green Flash.

Timmy’s Nook was never forgotten by residents and tourists alike, and the Legion has hosted reunions for fans. 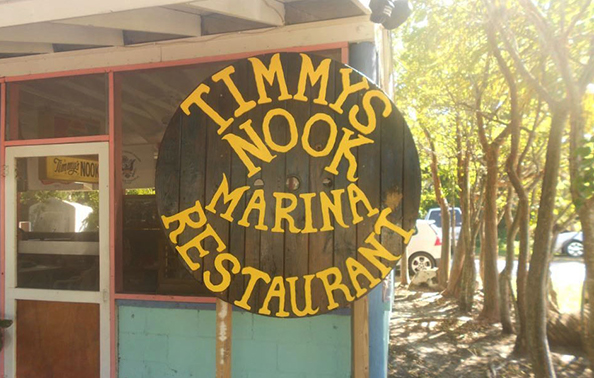 Book Direct and Save…and be served honoring our veterans’ service!